In Carbon County, five new cases of the virus were reported, bringing the county’s total up to 39 since testing began. Two patients were previously hospitalized due to the virus, but have since been released. To date, 26 patients have recovered.

Emery County added one new case on Monday, bringing the county’s total up to 16. Of these, no patients have been hospitalized and 14 have recovered.

Grand County leads the region with 45 cases, including the one new case announced on Monday. One patient is currently hospitalized and 39 patients have recovered.

Over 6,500 tests have been conducted within Southeast Utah. No deaths have been attributed to COVID-19 in the region.

For case breakdowns by age and gender, see the graphs below. 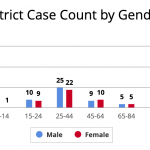 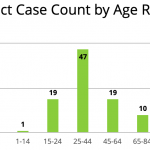