How long is one term of office for a member of the United States Senate? If you answered six years, you would have qualified for a friendly competition that took place at Castle Heights Elementary on Tuesday morning: the Constitution Bee.

Fifth grade students were given booklets with question about United States history to study prior to the competition. The classes then hosted their own competitions and processes of elimination. The winning students from the classes were then taken and placed in the school-wide competition.The bee kicked off with 11 competitors but quickly lowered to eight after the first go round. Questions such as “Who is the commander and chief of the U.S. Army?” and “How long is one term for a U.S. House Representative?” were asked to the ready students.

The event dwindled down to three finalists. The winning question, asked by Lions Club representative Leonard Miller, was: “Who is considered the father of the US constitution?” The correct answer, James Madison, was given by winner Wesley Murray. 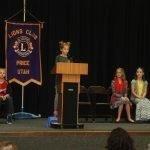 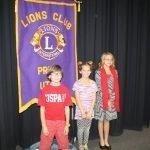 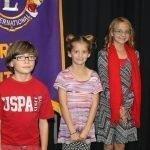