On Tuesday, an odd sight greeted Moab Cowboy Country Offroad Adventure owner/tour guide Kent Green. After years of giving tours throughout Moab, Green was used to stopping at a particular spot on Hell’s Revenge Trail to show people a 190-million-year-old dinosaur track set in Navajo sandstone. When the tour guide went to show the Jurassic age track to his tour group on Tuesday, it was gone.

“I saw the track for the last time on Monday evening,” explained Green. “I noticed it was gone on Tuesday around 4 p.m. I was out on a tour with some folks from California and I stopped there to show them the track and it wasn’t there. For a minute, I thought I was in the wrong spot but it was definitely gone.”

According to Green, the footprint was very deep, definite and slightly larger than an adult male’s foot with a natural fracture surrounding it, which would have made chiseling the track out of the ground easier.

“The track is from a 3-toed, meat-eating dinosaur,” explained Bureau of Land Management district paleontologist ReBecca Hunt-Foster. “A lot of people know it is there. Unfortunately, even a lot of people run over it in their vehicles. Whoever took it knew the place well.”

Green agreed with Hunt-Foster. “They were careful about how they did it, that’s for sure,” he commented. “Whoever took it knew it was there and knew about the fracture.”

What many people do not know is that removing tracks such as the one on the Hell’s Revenge Trail comes with civil and criminal penalties. According to a statement on blm.gov, theft or vandalism to paleontological resources is a loss to all of the people of the U.S. Depending on the extent of damage and the value of the resource, penalties include fines and/or imprisonment of up to five years.

“I think a lot of people are unclear that they can’t collect these things,” Hunt-Foster explained. “We are trying to spread the word better so that people know.”

Green routinely takes tours to the site where the track was stolen and is upset that a piece of history is now gone from the area. “People just love the dinosaur tracks,” he said. “Whoever stole it, stole a piece of history right out of the ground.”

The BLM is currently offering a monetary reward for individuals who give information leading to the discovery of the track. Hunt-Foster explained that the BLM is very interested in recovering a part of Utah’s history and placing it in a safe location. “Honestly, we are scared for its safety now,” she said. “We would probably try not to put it back where it was. Instead, we might place it in a museum or the BLM field office if it is ever recovered.”

The case is currently under investigation by local, state and BLM law enforecement. Information or comments regarding the track can be directed to BLM Law Enforcement at (801) 539-4082. 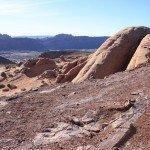 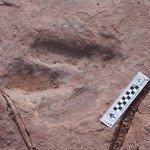