A special Price City Council meeting was hosted on Monday afternoon to welcome the new year with the oath of office ceremony for the mayor and council members.

This ceremony pertained to incumbent Mayor Mike Kourianos, incumbent Councilwoman Amy Knott-Jespersen and new Councilman Joe Christman. Mayor Kourianos opened the meeting by stating that Councilwoman Jespersen was not available to attend and would need to take her oath at another time.

He then thanked Judge George M. Harmond Jr. for being there to conduct the ceremony and for always supporting the council and youth council. The ceremony then began with Mayor Kourianos before turning the attention to Councilman Christman.

In the oath, the two swore that they would support the constitution and discharge the duties of office with fidelity. The oaths were then signed before an audience, including fellow council members and local law enforcement. The mayor extended appreciation to those in attendance and welcomed them to enjoy light refreshments.

“The bottom line is, with this position of being the mayor, I always like to be behind the scenes, not in front,” shared Mayor Kourianos.

He then stated he also appreciates the council and staff of Price City and said the fun part of the job is making a difference. Price City is making strides and changes on how to accomplish sustainability of the community, according to the mayor.

Christman also spoke, speaking on the seriousness of the oaths as well as the commitment that is made to move the city forward. He concluded by stating that whatever he can do to contribute, he is happy to do. 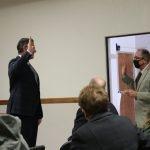 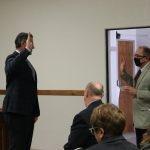 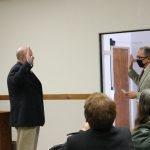