Since testing began, over 11,706 tests have been administered throughout Carbon, Emery and Grand counties. Of these, 243 have been positive and 50 cases remain active.

Carbon County leads the region with 136 confirmed cases of the virus. Thursday’s report announced that 27 cases remain active while 109 patients have recovered. One patient is currently hospitalized due to the virus while four others were formerly hospitalized. There have been no deaths attributed to COVID-19 in Carbon County.

Emery County has tallied 48 cases of the virus, 21 of which remain active as 27 have recovered. Two Emery County patients are currently hospitalized due to COVID-19. There have been no deaths attributed to the virus in Emery County.

As part of the total case count, the Southeast Utah Health Department also tracks cases involving students, teachers and staff at local schools as well as the university. Carbon School District has recorded 13 cases of the virus, five of which remain active as eight have recovered. USU Eastern has tallied 10 cases, seven of which remain active as three have recovered.

For case breakdowns, see the graphs below. For more information on COVID-19 and its impact locally, click here. 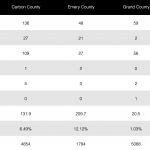 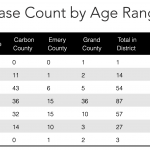 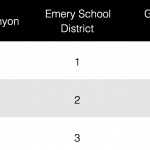