Huntington City Mayor Hillary Gordon has been working with UDOT since 2007 to have a traffic signal installed on 100 North and Main Street. After speaking with Larry Montoya from UDOT, he stated that after completing surveys on Main Street and 100 North, the levels of traffic do not meet the State’s criteria to warrant a traffic signal. However, the amount of traffic going on to Highway 31 did meet the criteria. Therefore, a light will be installed on 400 North and Main Street.

Several business owners spoke at the Huntington City Council meeting on Wednesday evening to voice their concerns about having a traffic signal on 400 North and Main Street. They fear that it will be bad for business and that it will cause more traffic concerns.

Mayor Gordon is not satisfied with UDOT’s decision and stated that the desired project is not working out as she had planned. She is still in negotiations with UDOT and has requested that another survey of Main Street and 100 North during the busiest time of the day and while children are going to school. The mayor has been contacted by many parents voicing their concerns over the safety of their children on the busy street.

The issue has been tabled until meetings with UDOT have been completed to the council’s satisfaction. 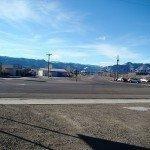