The Southeast Utah Health Department reported six active cases of COVID-19 within its region on Thursday evening. The report also included the announcement of a new Carbon County positive.

Since testing began, there have been 177 confirmed cases of the virus throughout Carbon, Emery and Grand counties out of more than 10,421 tests administered. Of these, 170 patients have recovered while one man died from COVID-19.

Carbon County has tallied 95 cases of the virus. Of these, 90 patients have recovered and there have been no deaths. No patients are currently hospitalized due to the virus; however, four were formerly hospitalized.

In Emery County, there have been 25 confirmed cases. Of these, 24 have recovered, leaving just one active case. No hospitalizations or deaths have been attributed to COVID-19 in Emery County.

In Grand County, there are no active cases. Out of the 57 confirmed cases since testing began, 56 patients have recovered and there have been two hospitalizations. The lone death in the region was a Grand County man over the age of 85.

Information compiled by the local health department also includes case counts affecting local school districts, which may be students, teachers, staff or administration. Since school began in August, the Carbon School District has had six people test positive for the virus. Four of these patients have recovered while two cases remain active. In the Emery School District, there has been one confirmed case and that patient has recovered.

For case breakdowns, see the graphs below. 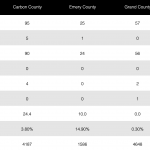 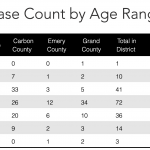 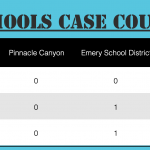