Jade Powell speaks to the Emery County School Board.

Tracey Johnson, Emery School Board President, welcomed those in attendance to the monthly board meeting on March 30 at Cleveland Elementary. Board members Marie Johnson and Royd Hatt were excused from the meeting.

First on the agenda was Trent Huntsman from Westland Construction. He gave an update on the projects at Ferron Elementary and Emery High. He reported that at Ferron Elementary, the drywall on the interior walls is being completed and all the utilities have been connected. The exterior insulation is being installed.

At Emery High, the Utah State Fire Marshal is expected to make an inspection this week. Then, ball games can be held prior to project completion. The crews are working on the dugouts, pouring concrete, the field house track and painting the interior of the field house.

Due to the high inflation costs of materials, the Emery High School architectural plan received major revisions in January to reduce square footage and any items that were not absolutely necessary for the new building. The recent bid came in $13 million over budget, even with cut backs. Funding will come from district funds, anticipated solar taxes and a future rise in capital levies. The bid was approved with a 2-1 vote in the affirmative.

Superintendent Ryan Maughan then made recommendations for hiring to the board. The following names were approved following background checks and reviews.

Emery County Commissioner Kent Wilson and Jade Powell then presented an interlocal agreement from Hornshadow Solar for approval from the board. This was a renewal agreement necessary because of the addition of nearly 200 acres to the previous land leases for the solar field. A fee of $200,000 was charged for the second agreement and those funds will eventually go to the school district when construction begins, approximately in January 2023. The agreement was approved by the board.

Discussion then considered a request from Emery High Principal Steven Gordon and Green River High Principal Kayce Fluckey regarding the responsibilities of the athletic director at the high schools. They requested an additional prep period as well as an increase in stipends for their respective schools. This increase was to cover the paperwork and additional activities that are now required by the Utah High School Athletic Association. This request was approved.

Following this, Cleveland Elementary Principal Janet Ewell gave her principal’s report. She said that they have been emphasizing improvement in writing. They are holding monthly intervention meetings to assist students and have developed K-2 phonic blocks. She added how much they appreciate counselor Felicia Jeff’s help with fulfilling the needs of students.

However, attendance seems to be a struggle at Cleveland Elementary, like many other schools. Emery School District Elementary Supervisor J.R. Jones presented Mrs. Ewell with a gift basket to recognize her for the rapport she has with the students and staff at her school.

Emery School District Business Administrator Jackie Allred then gave the annual audit report for School Foods Service Program, stating that there were no unsatisfactory findings, which is rare. The financial report for fiscal year 2021 received a certificate of excellence. 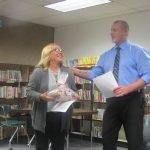 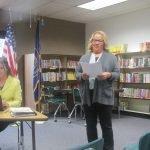 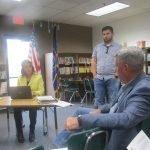 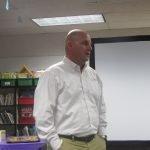