After spending seven consecutive years overseas serving in the United States Air Force, Rowan Coash returned stateside approximately two months ago. At the time of his return, Coash, 27, basically felt like a foreigner in the country he has served for most of his adulthood. Little did he know, but he was about to be welcomed back to the United States by complete strangers.

Following several weeks in Washington, it was time for the US soldier to say goodbye to family and friends and report for duty, but this time in San Antonio, Texas.

Coash set off on his journey from Vancouver, Wash. to Texas in a 2005 Toyota Corolla given to him by his parents. After travelling several hundred miles, the soldier’s car stopped approximately 35 miles outside of Price. According to his mother, Patricia Coash, the car was picked up and towed to a service station in Carbon County. After mechanics diagnosed the vehicle, it was determined that the engine was blown and would need to be replaced before the journey could continue.

Due to finances, the repair was not feasible. “Rowan was upset that he would not make it to San Antonio in time,” Patricia explained. “He was afraid he would be listed as AWOL (absent without official leave).”

A close family friend, Erica Krochmalny learned of Coash’s dilemma and quickly jumped into action through social media. “A Facebook post by Erica simply asked for anyone in the Price area to assist in any way,” Patricia stated. “Before we knew it, people we have never met were offering to help.”

According to the soldier’s mom, Price residents Rob and Leslie Holmes housed the broken down car until repair arrangements were made. A rental truck was also arranged and Coash was quickly back on the road.

Word of the stranded soldier continued to spread through the local area. Before long, Tony Basso GM stepped forward and offered to repair the Corolla free-of-charge. The Coash family was surprised by the generosity but extremely thankful. “What an amazing town and amazing people,” Patricia posted on Facebook. “As the mom of the service member, I cannot extend my thanks enough for all that everyone is doing for my son and our family. Words just can’t say thank you enough.”

Coash made it to San Antonio in time to report for duty. Meanwhile, the broken down car still sits in Price as repairs are being made. The experience has renewed the Coash family’s belief that good people still exist. “Before this happened, we did not know one single person from Utah,” Patricia admitted. “Now, I would feel comfortable knocking on several people’s doors just to say hello and thank you.”

While overseas, the Air Force soldier served in Japan, Italy and several other countries. Being gone for so long from the United States, Patricia explained that her son is learning what it’s like to live in America all over again. “Through this experience, he has been shown what America is all about,” she concluded. “Instead of being told thanks for his service, he was shown thanks from the great community in Price.” 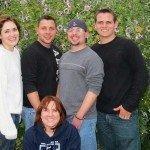 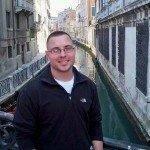 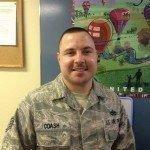 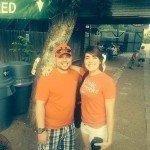