Watt is a native of the area who was born in Spring Canyon and graduated from Carbon College. He is a published author that has written a grip of novels about Carbon County. Watt’s focus of topic on Thursday was the history of the roads and rails of Carbon County.

While being welcomed to the meeting, it was expressed that the society was grateful that he had traveled from South Jordan to be with them. Watt then jumped right into the discussion, beginning by informing those in attendance that he was going to cover the roads and how they have changed and what other events have occurred on them.

Watt then explored the settling of the area, discussing the two gentleman that traveled from Salem, one named Abraham Powell. While Powell passed away in December of 1878, his travel partner grabbed two other individuals and returned to the Price River Valley to establish a wagon trail. By 1882, about 42 families were established in the area. In 1883, the Denver and Rio Grand Western built a railroad from Salt Lake City through the area. Watt emphasized how freighting made Carbon County very popular, also highlighting what the roads were used for, such as freighters, ranchers and those traveling to see history.

The valley used to be isolated without a road in the Price Canyon. This meant that all travel was by the rails until the Midland Trails Auto Club raised funds in 1913 and gathered together to create the road. Monies for the road also came from pledges and the state legislature.

The road was taken through Castle Gate, starting at the bottom and winding to the top. Those that traveled the road recall how treacherous it was, stating that travel was about 10 miles per hour and curves were so blind that drivers would honk before going around any corners.

In 1928, the canyon was closed for 100 days to conduct improvements, though it did not help much. Many changes were made to the canyon road to make it what it is today, including a tunnel that many reminisce on driving through.

Watt continued to entertain the society with his knowledge of the rails and roads of Carbon County, including personal history and experience. 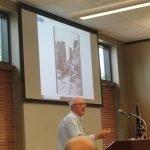 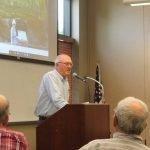 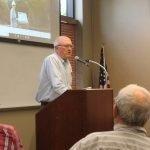 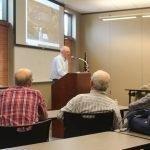 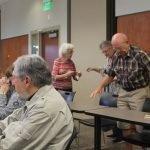 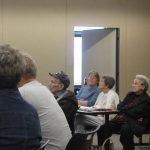 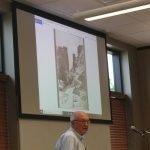