A standing room only crowd filled the Emery County Commission meeting room on Tuesday at the regularly scheduled commission meeting. The draw to the meeting was a comment period concerning Long Street in Green River.

Counsel representing the Holyoak family spoke to the commissioners regarding Long Street and its access to BLM wilderness study areas. He stated that the street crosses private property belonging to the Holyoak’s and that there is no other way to access the public land. Since this land is a wilderness study area, it has forced Mr. Holyoak to become a gatekeeper. He also stated that it was not a maintained road from 1984 until 1992 and was only used sporadically for eight years. He insisted that it was not a county road because of low volume limited use and that it was cost prohibitive to maintain a private road. He stated that Mr. Holyoak does not intend to keep anyone away, will maintain access for adjoining land owners and for anyone who wants to enter public land, but they cannot continue to drive on his private property. They find no records to show that Long Street is a county road. They want no more conflict, but must protect their property.

David Blackwell, legal counsel for Vetere’s and June Adams stated that Long Street is County Road #1001 and has been since a bus turnaround was constructed there in the early 1980’s (1983-1985). He said county roads are made through use. A prescriptive easement allows for this continuous use.  Blackwell further stressed that zoning requires access to a county road in order to build so building permits would not have been issued along this road if it was not a county road. It would also be a reduction of property value if abandoned as a county road. He also pointed out that the new fencing ordinance has affected these disagreements. Blackwell said it has been court established that once a public road has been used for more than 10 years it becomes a legal public access.

After hearing from both legal counsels, Commissioner Lynn Sitterud opened the meeting for public comment but reminded them it was not a public hearing and that statements must be no longer than three minutes and be very civil or the comment period would be closed. Tim, Greg and Frank Vetere all spoke about their use of the road for many years. They also remarked that this conflict came about recently when the Holyoak family purchased property along this street.

Many other citizens from Green River spoke about their use of the road for decades and their desire to be able to continue to do so. Some also stated they could understand Holyoak’s feelings but did not want to lose the right to access the hunting, fishing and historical sights between there and the Price River that they have for many years. Frank Spadafora remembered herding sheep and using this access in the 1930’s.

Jaydon Mead from the BLM reminded the audience that the public land is a wilderness study area and no motorized vehicles are allowed on wilderness study areas and that could only be changed through a congressional act. June Adams, property owner, thanked the county for maintaining the road and would like it left open.

Commissioner Sitterud thanked the citizens for their input and noted that if a public hearing became necessary they would all be informed. County Attorney Mike Olsen will look over the matter and make recommendations to the county. 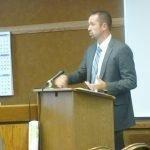 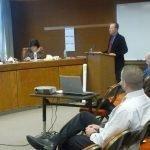 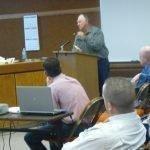