After much debate and anguish, HB 11 Student Athletics Participation (transgender bill) passed in the final moments of the session. We all knew that the governor was going to veto the bill, but we had to vote again on the bill because the Senate had amended the bill we passed earlier in the session.

We also passed SB 49 State Film Production Incentives Amendments. This bill adds $12 million to the film industry incentives, but it is to be used in rural counties. It has a two-year sunset for evaluation purposes and was supported by all rural county commissioners. This bill was hotly debated in caucus and on the floor. The Hope Scholarship Bill was soundly defeated. The bill needs more vetting and may come back next year.

We reduced State Income Tax from 4.95% to 4.85%. We are initiating a Non-refundable Earned Income Tax Credit to help the working poor; we also raised the income level requirements for residents who are on Social Security.

We also allocated $6 million ongoing from the G/EF to provide funding for individuals with disabilities who are waiting for services. This program is critical and never has enough funding to help the families who need it. State employees and higher education employees received significant market value pay increases. Higher education also received funding for many programs, such as a new veterinarian school at Utah State University in Logan.

I opened five bills for this session. I abandoned one, passed two and will continue to work on the Medically Assisted Treatment bill and the Sales and Use Tax Refund Amendments bill to have them ready for the 2023 session.

As House Chair of the Business, Economic Development, and Labor Sub-appropriation Committee, I receive numerous requests for appropriations by individuals and other entities. I made the following funding requests and they received funding: 1. Boys & Girls Club building funding, 2. Refugee Soccer Program and 3. Women’s Rural Entrepreneurship Program. I had a couple of other requests from cities, but they were put into an Arts, Capital, Events, and Economic Development Grants program where they will have to apply for grants. A number of programs were funded or created for rural economic development. They will be available July 1, 2022.

There were 1,189 bill requests and 84 resolution requests. The House introduced 490 bills and the senate introduced 257 bills. A grand total of 513 bills were passed with the House passing 286 and the Senate passing 193. These made for a busy and sometimes hectic legislative session. Because we did a whole lot of “stuff,” if you have questions, please feel free to contact me.

Following redistricting, House District 69 will become House District 67 and will include all of Carbon County as well as a large share of both Duchesne County and Emery County. Thank you for giving me the opportunity to represent you this session. As always, you can contact me at (435) 650-1969. 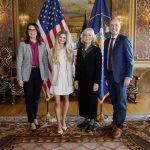