Students at Ferron Elementary are familiar with the book “Sadako and the Thousand Paper Cranes” by Eleanore Coerr. The book is a fictional re-telling of the story of Sadako Sasaki who lived at the time of the atomic bombings.

Sadako developes lukemia (her mom calls it “atomic-bomb” disease) and as she lies in the hospital, she folded 1,000 paper cranes because an ancient Japanese legend promises that anyone who folds 1,000 paper cranes will be granted a wish by the Gods.

Omitting the part of the legend that the cranes needed to be folded by the one needing the wish, the students, faculty and staff at Ferron Elementary folded 1,000 origami paper cranes for Averie Ward. Averie is the two-year-old daughter of Brent and Jodie Ward of Ferron. Averie was diagnosed with a rare childhood cancer and has undergone surgery as well as chemotherapy and radiation in the recent months.

Despite the aforementioned omission, students at the school are sure the 1,000 paper cranes are the reason Averie and her family have been able to return home for a little while after more than 100 days in constant doctor care.

Students also covered a bulletin board with hearts filled with well wishes for Averie. 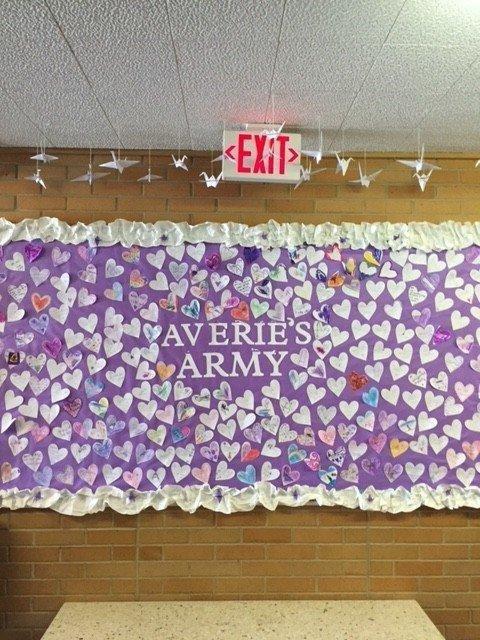