With the fall sports season coming to an end, the Carbon School Board recognized the various athletes for the exceptional season, both athletically and academically. Beginning the recognitions, all Academic All-State athletes were welcomed to the podium.

The Carbon High School (CHS) cross country team was recognized as several athletes from both teams earned Academic All-State. Ambree Jones and Beverly Lancaster were acknowledged from the girls’ team along with Braxton Ware and Nathan Engar from the boys’ team.

Continuing, girls’ tennis recognized its Academic All-State athletes, Elizabeth Blackburn and Lindsey Snow. Head coach Pete Riggs took a moment to express that he was very proud of the team for not only taking region this year, but also for the fact that all three of the seniors are Sterling Scholars.

Academic All-State athletes for girls’ soccer team were also acknowledged by the board, including Beverly Lancaster, Jezmin Pressett and Kinley Cowdell. CHS girls’ soccer head coach Cynthia Lancaster took to the podium with the team to summarize the girls’ season.

The Lady Dinos finished the season as region runner ups and placed fifth place during state. They were also fourth in RPI standing while several athletes placed in the top 10 in the state. Cowdell was third for assists and seventh for goals, with Shalyce Rahaula sitting at seventh for assists. Goalkeeper Emma Flemett took third for saves in the 3A division.

To round off the recognitions, CHS football player Dylan Curtis was recognized for Academic All-State.

“The end of seasons are sad and biter-sweet because you don’t want it to end, but when they do end, the celebration really becomes more apparent in the success that they’ve had,” said Superintedent Mika Salas. 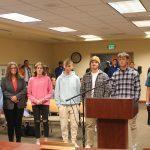 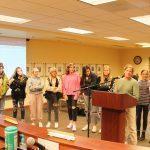 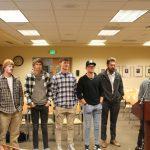