Traffic was at a standstill for those traveling southeast from Carbon County around 1 p.m. on Wednesday due to an accident that occurred at mile post 269 outside Green River.

Cars were at a standstill for more than three miles of the highway and for a number of hours while first responders worked diligently. More than five vehicles were included in the accident, which reportedly began when a pick-up truck pulling a trailer jack-knifed.

Although the cleanup and number of vehicles involved in the accident were significant, there were no major injuries to be reported; one out-of-area female was said to be transferred to the local hospital to be treated for minor injuries.

Check back to ETV 10 News for more information as it is made available. 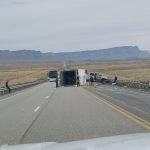 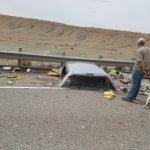 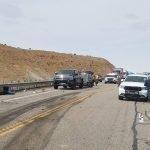 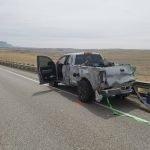