An accident involving a semi truck occurred around 4 p.m. today on US-6 at mile post 192 (the Red Narrows).

According Sgt. Todd Royce from the Utah Highway Patrol, the incident caused a hard closure (all lanes closed) for a short time to allow a wrecker to navigate the canyon. The semi was carrying a load of wood that covered the highway. Most of the wood has been cleaned up at this time and crews are now working to upright the semi.

The accident is currently impacting two lanes and the estimated wait time is more than 15 minutes. Traffic is being directed by alternating a lane between vehicles going each direction.

Castle Dale native Haylnn Fifer was driving behind the semi when it tipped.

“To me, he honestly didn’t seem like he was going too fast, but fast enough that he tipped over coming around the Red Narrows,” explained Fifer. “His trailer went down almost in slow motion and then his cab followed with it. I pulled over, called 911 and made sure the driver was okay.”

The driver of the semi was not harmed and no other vehicles were involved in the accident.

“The driver was out of the truck and sitting with us before police and ambulance got there,” Fifer concluded. “It was scary, but everyone was okay.”

Sgt. Royce stated that crews will have the accident cleaned up and traffic will return to normal in 30-60 minutes. 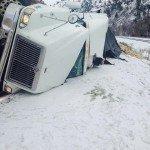 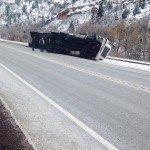