UPDATE: An auto accident Wednesday afternoon at 220 North 300 East slowed traffic for a brief time. The incident occurred at 2:50 p.m., just before nearby schools were dismissed, causing congestion on the busy roadway.

According to Price City Police reports, Helen Poulos of Price was traveling northbound in a 2006 Chevrolet Impala. She failed to maintain proper lane travel and collided into a parked vehicle. Poulos was cited for failure to operate within a single lane.

Police did not indicate whether any injuries were sustained. 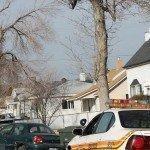