This month, the honor went to Trinity Kerby of Balance Rock Eatery and Pub in Helper. Carbon County Tourism Specialist Tina Henrie stated that she had been at the Balance Rock earlier that day shooting a promotional video and was amazed to see Kerby in her element, working hard.

“She literally keeps it all together with a smile on her face,” Henrie stated.

Henrie continued by reflecting on the way that Kerby takes time with each customer, engaging them in conversation and learning where they are from if they are traveling, even while very busy. Henrie remarked that she was happy to present the customer service award to Kerby, who was given a recognition certificate and Visa gift card. Commission Chair Larry Jensen stated that the hotels and restaurants are the face for visitors and thanked Kerby for what she does.

Those who would like to nominate someone for the tourism service award may do so by clicking here.

Also recognized during the commission meeting was Marty Wilson, who was recently named the Paramedic of the Year.

Don Marrelli spoke on Wilson, stating that he believed it would be a good thing to recognize some of the employees and Wilson especially. He briefly touched on her history and stated that throughout her career and now, she is extremely dedicated to the county and the EMS system as a whole. He said that Wilson has had a number of recognitions prior to this one.

“She is just a huge asset to our county and very definitely the EMS system,” Marrelli concluded.

Many of the EMS employees and family members were in attendance to support Wilson. She was given a standing ovation and the commissioners presented her with a certificate before each shaking her hand. 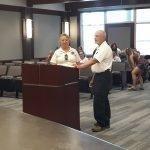 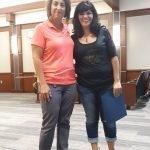 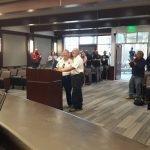 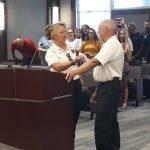