Aerospace companies, along with state and local leaders, traveled to the local area recently to present career options to high school students and to potential business partners.

According to Val Hale, Executive Director of the Governor’s Office of Economic Development, the goal is to get production suppliers in the aerospace industry to rural Utah. This industry is thriving with 1,000 companies that employ 30,000 employees. This is a great opportunity for people in rural Utah to connect with aerospace companies.

Hale feels the greatest potential in Carbon and Emery counties would be for small businesses to become subcontractors and/or suppliers for industry in northern Utah. This opportunity would aid in creating new companies as well as providing new skills in existing companies.

Aerospace companies are supporting STEM education because they have trouble finding workers who are equipped with the skills and knowledge to fill jobs in aerospace, IT, and medical fields. These fields require a STEM background. The need to educate young people to work in these high paying jobs and pursue the many opportunities is greatly desired. Women as well as men are needed to meet the demands of the scientific industry. This can be done at home as well in the workplace.

Utah Governor Gary Herbert has concern for the economic welfare of rural Utah. He says that Utah is only as strong as its weakest rural county. The expansion in these areas would be a big benefit for rural areas.

Mr. Hale stated that in Castle Country we must diversify the economy in order to grow. This can happen without going to the Wasatch Front. There are strong internet capabilities in the two counties. In fact, it is stronger than on the Wasatch Front, a block from the state capitol.

Emery County Economic Director Jordan Leonard welcomed a rather large group to the breakfast meeting at Emery High Auditorium and introduced Larry Davis, superintendent of Emery schools. Davis was proud to be able to host the event to advance STEM education. Emery School District received a $200,000 grant for K-12 grades. This grant will be used to further robotics, Legos and computer education.

Davis stressed the need to prepare students for our new local economy. The district would like to be in a position to prepare students so that they can return to the county, but there is a lot of work left to do.  He stated appreciation that the students would be able to see the opportunities available to them in STEM education.

Emery County Commissioner Keith Brady also welcomed visitors to Emery County and thanked them for being at the meeting and forming partnerships. Representatives from Senator Hatch’s and Senator Lee’s offices admonished all to come together; industry, government and education as partners.

Hale stated that the GEOD takes this very seriously and won’t rest until every city and county in Utah has a strong economy. They realize the special challenges with the decline in energy extractions in Emery, Carbon and Uintah counties. Thus, they are hoping to connect businesses here with the over 1,000 companies of the state who have 200% of average state wages.

1. Seek potential suppliers and subcontractors.  There is a need for quality, lower cost and accessible suppliers.

2. Promote aerospace and diminish the “space paradox.” That paradox being that space is more important than ever but recognized less because it has become commonplace.

3. Support STEM education. Rice said that the average wage at Lockheed Martin is $77,015/yr., and there are many opportunities to grow with the company.

A Trade Show and dinner were hosted in Carbon County later in the evening, during which local companies were able to present their products to the industry representatives in hopes of becoming future vendors. 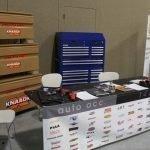 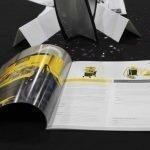 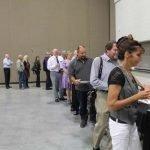 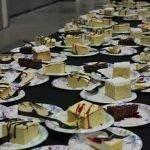 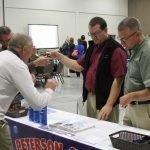 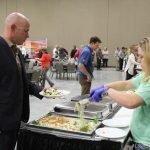 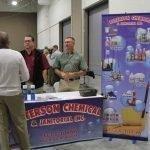 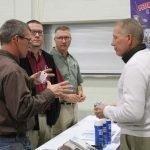 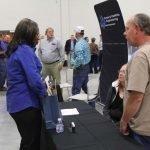 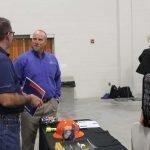 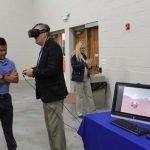