In the opening statements of the Emery County Public Lands meeting last week, chairman Rod Player announced that there are two positions on the board opening on Jan. 1. One position is for one year only following the resignation of Bruce Wilson and the other will be a four-year term. Applications are available online at emerycounty.com, can be picked up at the county clerk’s office or can be obtained by contacting Ray Petersen in the public lands office. Chairman Player thanked Wilson for his years of service and working knowledge he has added to the Public Lands Commission.

Player also spoke about the sparse attendance at last month’s meeting in Green River. Next year’s meeting schedule will continue to be on the first Monday of each month with exceptions for field trips in July and September. These field trip dates are yet to be determined. The topic of evening meetings was discussed and Player remarked that this was on the request of the commissioners in order for more to have the opportunity to participate. However, this was not the case. Many agencies that the council needs to hear from cannot make the evening meetings, meaning that evening meetings will not be scheduled unless a special need arises. The schedule for meetings was approved by the council.

Emery County Commissioner Gil Conover reported that the positions on the advisory council for the Public Lands Bill recreation areas should be posted in the coming weeks. This will be done on the federal registry. A number of the council members reported being contacted by phone for a survey regarding public land issues in Emery County and Utah. Commissioner Conover reported that their consultant in Washington will keep up on it, though the bill is done and it is a law.

Discussion also was directed toward the Holyoak property that has been sold in Green River and the county road rights through that property and adjoining property. The county is still considering these requests.

Chris Conrad from the Bureau of Land Management (BLM) introduced Chris Detis, the new fire district manager. He told the commission that he is now heading the Green River District from the Vernal Office, not from Moab. This district will include Grand, Duchesne, Uintah, Emery and Carbon counties. They will be hiring new field specialists and things are still in the planning process. He also remarked that with complexity going up, the budget seems to be declining, but he has hopes this will change.

Conrad spoke of the relocation of the 400 BLM jobs from Washington DC to the West. This will change nationwide contracting. Although Jurassic Monument is closed for the winter, new personnel will be hired when it reopens for summer. Conrad also reported that Lance Porter, the district office manager, has had questions on the positions for the Advisory Board for the National Recreational areas. The BLM San Rafael Travel Management reviews are scheduled for Dec. 16,17 and 18.

Mark Stilson from the Division of Water Rights stated that there had been only one filing to move water points of diversion from the upper Green River to land on both sides of the river downstream. Requests have also been made about stock watering rights on abandoned oil and gas wells. This water can be filed on. There has also been concern about keeping water in Desert Lake during the dry seasons. There is an old Fish and Wildlife filing, yet there has been no runoff for the lake. Stilson also reported that a new Utah State Water Engineer is being hired. Questions regarding secondary water metering were directed to Stilson and he stated that this is still pending as to the extent and direction.

Chris Wood from the Division of Wildlife Resource reported that they are conducting mule deer captures by helicopter in order for testing and collaring to be conducted on these animals. This will be on Dec. 18 and 19. The big horn sheep capture was finished on Nov. 22. New mule deer management was discussed at the last RAC Meeting held two weeks ago and the next meeting will be Wednesday, Dec. 13 in Green River. The topic for this meeting will be bear management. A committee will be meeting on Jan. 13 to work on the bison migration problems in Range Creek. A recent flight over this area shows that the bison have moved out of the area, but are expected to return. Wood also reported that Ferron City had an Urban Deer Removal Program approved and that Castle Dale City is also beginning the steps to get this approval.

The United States Forest Service was represented by Troy Sewys during the meeting. He stated that the Christmas tree permits are almost all sold with only about 50 left. Firewood permits are also discontinued for the winter months.There is a lot of snow on the forest; however, the roads and gates are open.

The timber sale in Reeder Canyon is moving forward. Black Canyon is sold and, as soon as weather permits, cutting will commence. The next area for sale will be Brown’s Canyon. The Forest Service is trying to keep the sales prices low, making them proactive. The scoping letter for the Crandall Canyon pipeline was set up yesterday. This pipeline will drain the Crandall Creek into the Huntington Creek. The final plan for Wild and Scenic River will be ready in December and then public reviews will begin. They are planning to finish the Trail Mountain burn in the early spring. This is contingent on the reopening of the Cottonwood Mine because as soon as the portal is finished, the burn will be cancelled.

Although Utah School and Institutional Trust Lands Administration was not at the meeting, Torgersen reported by phone that the land south of the Cottonwood Mine has been purchased by Wolverine (Sufco).

Councilman Ward gave a water report update that the recent storm had been lifesaver for the watershed, which had gone without a storm for many days. All the reservoirs are between 70 and 90 percent full, except Millsite, which is filling. Miller’s Flat Reservoir also had to have the water drained because of a gate issue. This has been fixed and water is once again being stored in that reservoir.

Jay Humphrey, Emery Water Conservancy District Manager, told the council that its help will be needed in getting the title to the Joe’s Valley Dam. The Emery Water Conservancy District has been working with the Bureau of Reclamation for the transfer of the title to that dam for years and cannot seem to get the transfer made. The issue seems to be the difference between a special use permit and an easement.

“It is as simple as changing the name on the title from Bureau of Reclamation to Emery Water Conservancy District,” Humphrey remarked.

The dam is aging and will need rehabilitation, which cannot be done without the title. When asked how the council could help, they determined that both consultants in Washington needed to work together to get help from the top (congressmen) down. 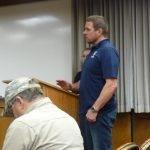 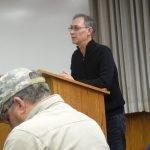 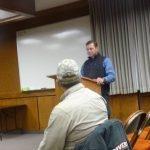 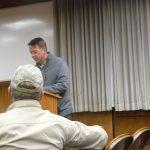 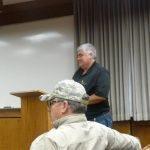 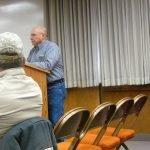