This month the recipient is Don Marrelli, the Carbon County Ambulance Director. Marrelli was nominated by two fellow employees, Marty Wilson and Scott Barney. While Wilson was unable to attend the meeting, Barney was there and eager to speak on Marrelli’s accomplishments.

Before turning the time over to Barney, Barnes spoke about the department, remarking that there is always a crisis and it must be a difficult department to run. She commended Marrelli and the entire department.

Barney then began by reflecting on Marrelli being recognized as the Director of the Year recently, believing that he should also be recognized within the county. Marrelli has worked in EMS for over 30 years and is known to be a very fair person that sees the good in people, giving them a chance. Barney seconded Barnes opinion on the department being a tough and necessary position.

“As you know, the ambulance is a thankless job,” Barney remarked. 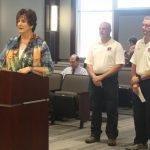 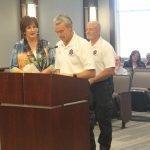 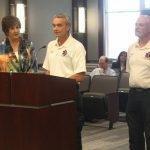