Last Sunday morning, a couple from Orangeville awoke to discover blood on the doorstep and under the carport of their home in the Cottonwood Cove Subdivision. After following the blood trail and searching the property, they found their cat bleeding and injured in a neighboring yard.

They immediately called veterinarian Dr. Sharmon Gilbert from Emery Animal Health to meet them at the clinic for emergency care for the animal.

Upon examination, Dr. Gilbert discovered that the cat had no feeling in the lower extremities and was paralyzed due to a spinal injury. The owners of the animal were forced to make the difficult decision to have their pet euthanized.

A post mortem x-ray showed that the injury was caused by a pellet that hit the cat directly in the spinal cord, which immediately paralyzed the animal. A fragment of the pellet was lodged further up the spine, which caused the cat to be in a considerable amount of pain.

The blood trail indicated that the cat had been shot while sleeping on the side entry step in the resident’s driveway under the carport. They reported the incident to the Emery County Sheriff’s office and Deputy Kay Jensen responded to the scene and took the couple’s statement. Unfortunately, without any witnesses, there was little more he could do.

Those with any information on this incident or any other acts of animal cruelty should contact local law enforcement. 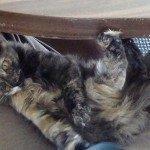