Jaron Hansen, a student from Emery High School, spent time at the legislature speaking about the insulin bill. He has Type 1 Diabetes and is worried about the rising cost of insulin.

I know every week is interesting at the Capitol, but we had a couple of events that happened in Washington DC that caused a stir (understatement) here in Utah.

After Senator Romney voted to impeach President Trump, he caught the redeye and flew to Salt Lake City. Senator Romney met with our leadership team and I heard it was pretty interesting. There is already a bill in place to allow a senator to be recalled by the citizens of Utah. However, now there are thoughts of censure, resolutions of support for President Trump and who knows what else. I have received numerous emails and phone calls from constituents asking me to support it all, including just leaving things alone and staying with the business of the state. I think and hope that as emotions calm down, we will just keep doing what we need to do. We are on such a short time frame that throwing in other distractors are just that: distractors.

A bill that has come to my attention is HB 207. This bill deals with the price that people with Type 1 Diabetes have to pay for their life-saving insulin. I had no idea that insulin was so expensive; it would have a very negative impact on anyone’s budget. I received an email from a young man in Emery County who is very anxious about his future. He would love to be a small business owner but knows he cannot afford a hefty health insurance premium and an expensive insulin copay.

HB 207 has several facets to it and one part is to cap the amount a diabetic would have to pay for their insulin. Hospitals have seen an increase of patients coming in with hyperglycemia and diabetic ketoacidosis due to inaccessible insulin. A vial of insulin, which cost around $20 in 2002, has increased to nearly $350 today. There are several other bills in the Senate and the House that are dealing with the same issue; we just need one to pass to help those dealing with the daily stress of this disease.

Two other interesting bills deal with something about which I have been approached: wine of the month clubs. A senator and representative have both introduced legislation that would allow wine of the month club members to have their wine delivered to a local state-run liquor store for pick up. The wine would not be subject to the state’s 88% markup on wine, but customers would pay the state-run stores a handling fee, which would still make the wine less expensive for the customer. The bills are SB 103 (which is more restrictive) and HB 157 if you would like to follow them. I will support both of these bills.

HB70 is a bill that would eliminate straight-ticket voting. It passed out of committee with a 7-2 vote. Many people vote strictly for one party and then think they are done. There are so many important things, like voting for judges or school board members and constitutional amendments. Utah is one of seven states that still allow straight ticket voting. Both Republicans and Democrats have supported this in the past. This bill didn’t make it through last year; we will see if it will be successful this session.

Just go to le.utah.gov and type in bill numbers or subjects you are interested in and you will be able to look them up. You can also find committees and read the agendas and listen to past meetings or listen to them live.

Thank you for allowing me to serve you. Please reach out to me with any questions or concerns. Phone: (435) 650-1969. Email: christinewatkins@le.utah.gov. Facebook: Representative Christine Watkins – District 69. Please be patient and feel free to remind me if I haven’t gotten back to you. 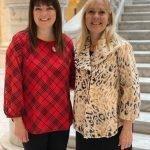 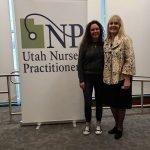 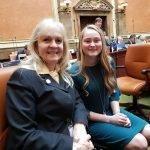 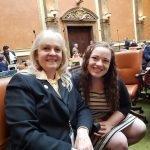