Most students get their experience about Utah History from classroom materials, textbooks and internet resources. While these are good ways to learn, there are other ways too. Project based, hands on learning can be the best way for kids to learn, and to have them remember it.

That is the goal each year of a Mountain Man Rendezvous that was held this fall on the lawn of the Lighthouse High School.  School buses full of students studying Utah history descended on the site to learn first hand about one of the very earliest periods of the states story concerning European and white Americans who poked their way into the wilderness that existed in Utah at the time.

“Historically, rendezvous took place once or twice a year,” said Karen Bedont the Assistant Principal at Mont Harmon Middle School, who along with her husband Paul organize the school rendezvous each year.  “This was a time when the mountain men would gather to sell their furs to the fur companies and to restock their supplies.  In Utah, mountain men would hide or ‘cache’ their furs until a rendezvous because traveling with their entire catch for the season was too difficult.”

An area in northern Utah, Cache County to be specific, was one area where several mountain men would hide furs, then gather there later in the year for a rendezvous. Events in the Rocky Mountain area took place at various locations each year including in the Cache Valley, McKinnon, Wyoming and Granger, Wyoming.

`The event in October was a chance for students to see what life was like in the pre-pioneer days of the state.

“I began the district rendezvous in 2004 with the 200th anniversary of the Lewis and Clark journey,” said Bedont.  “We ran the event for about 5 years and then took a break.  We started doing it again last year.”

The rendezvous is for the 4th grade and the 7th grade students in the district. Those are the grades that study Utah history as part of their curriculum.  This activity provides the students with an extension of the classroom lessons and allows them an active role in their learning.

Students who attended this years event came from all five elementary schools and both middle schools.

“There is usually between 450 and 475 students, teachers and chaperones who attend,” said Bedont.  “Teachers and parent chaperones took small groups around (to the various stations) to learn about different aspects of mountain man life and how they survived. They also learned a bit about the Native Americans who lived during that time.  Students were able to taste an authentic bean and corn dish. The recipe came from Lewis and Clark’s diary.”

Bedont hopes to have the event grow with even more learning experiences for the students in years to come.

“We are looking to add more stations next year and perhaps adding more time so the community can participate in the event.  All the participants are volunteers who provide this experience for the children of Carbon School District.  We need to thank them for their time and efforts,” concluded Bedont. 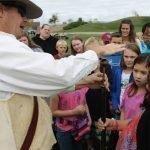 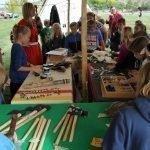 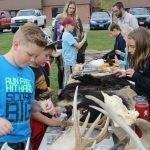 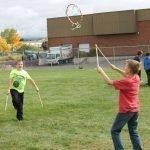 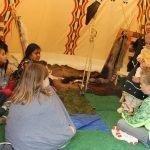