One of the challenges that was given to principals at Carbon School District elementary campus’ this school year was to create some kind of visual data wall, which students, staff and the public could see, that would show the progress in school goals and reading levels among the grade levels. Some schools created bulletin boards, many of which were very impressive and colorful. Howeverm Sally Mauro Elementary upped the ante to a whole new level by working with a local Helper artist to create what is considered to be a permanent fixture in the front hall of the school to do the job.

“The data walls are to display the growth we are making in school goals for the year,” said Blake Allen, the principal at the school. “I talked with our school leadership team and asked them what they wanted to do and how they wanted it to look. The idea came up to bring in a local artist to help us do it. We all thought it was important to build those connections with the local community. Consequently, we asked Ben Steele if he would come in and talk with us. He has children that go to school here and he said he was happy to look at the project and work on it for us.”

Allen said despite the amazing creativity of the teachers in the building, they all felt that having a professional artist design and build the wall would be a great accomplishment. Steele shared many ideas with the staff and the teachers picked the idea that they thought would fit the best.

Steele said that his original concept was that the display had to be around one of two things; mining or trains. He was able to combine them.

“In thinking of those two things, the train lends itself to an obvious goal of the cars collecting the information and each car could represent a grade,” Steele said while standing in his studio in Helper. “The engine represents the school. It was just a kind of natural fit for the tracking of certain goals.”

Steele’s main claim to fame is painting, but the train was more a “sculptural” project. “While we do mostly painting, we do it on canvas or panels, so we know surfaces,” stated Steele. “So, we used the technique of how we paint on panels for this project.”

It was created on quarter inch MDF with 7/16 LSB as backing on each representation. Once finished in his studio, he brought the panels to the school and installed them himself. Allen said after some surveying, they thought the best place for the display was down the front hallway, and based on Ben’s measurements, it stretches down most of that corridor.

“Ben and Melanie, his wife, not only donated the talent and work to create it, but they also donated all the materials as well,” concluded Allen. 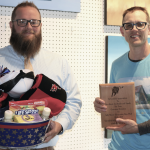