The Episcopal Diosese of Utah as a part of their 150th anniversary Celebration created an event called the Souper Bowl of Caring where they matched funds raised at local Episcopal churches throughout Utah.

ASM participated in this event and has now received matching funds from the diocese allowing us to distribute $1,114 divided equally between the USU Eastern Sun Center Student food supplement Program and the Carbon county Food Bank. 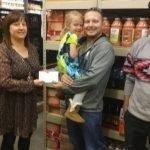 Chris and Remany DeVaney present check for $557to Geri Gamber and Tyson Benally of the Carbon county Food Bank.