Ashton Bell homered five times in three games for the Lady Spartans during the 2A Playoffs last week in Spanish Fork, which increased her all-time state-leading home run mark to 19.

Bell needed just one game on May 7, an opening round loss to the Enterprise Wolves, to tie and break the all-time Utah state record for home runs in a season. She bashed two home runs against the Wolves in the Spartans 15-8 to break East High’s Kuea Angilau’s mark of 15, from just last year.

Bell then added two more dingers, which were both grand slams and in the same inning, to the record in her team’s 28-7 thrashing of Rowland Hall in the one-loss bracket. She also nailed two doubles. Bell then capped off her brilliant career with her 19th and final homer in a tough 9-8 loss against Gunnison, which ended the Lady Spartans’ season.

Bell finished her high school career with 26 home runs, good for third place all-time in the state for career homers. She also sits in a tie for first for grand slams in a game with two and in a tie for second in career grand slams with three. Bell’s 48 RBIs this season also places her in a sixth place tie for RBIs in a season.

“Honestly, it’s the best feeling knowing I worked so hard to get a record,” Bell said. “On the weekends, I would constantly hit.”

With Bell on those weekends was Emery head coach Shaun Bell, who doubles as her dad.

“I am just at a loss for words,” Shaun said about his daughter and what she’s accomplished. “She gave it her everything. She just plays her heart out.”

As a team, Emery hit 36 home runs, which broke the record it set last year with 28. The 2015 total places the Lady Spartans on the all-time home-runs-in-a-season list in third place.

Fellow Emery senior Kambrie Hinkins kept pace with Bell throughout the season, with each pushing the other in the home run column. Hinkins finished the season with 10 homers.

“She’s a beast,” said Hinkins of her best friend and teammate Bell. “We fuel each others’ fires.”

Hinkins said it seemed when Bell would hit a home run, she would hit one, and vice versa. The two each hit homers in five games this season.

Bell’s softball career will continue next year as she was offered, and accepted, a scholarship to Colorado Northwestern Community College in Rangely, Colo. Though recruited as a pitcher, Bell might find herself in the batter’s box more than most pitchers.

Shaun Bell said his daughter was on a recruiting trip to CNCC when the coach gave her just five swings in the batter’s box.

“She hit three of the five out,” Shaun Bell said. 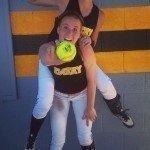 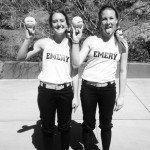