The history of this Church is of interest to its members as well as to the Community in general.

On August 15, 1916, the feast day of the Assumption of the Blessed Virgin Mary, the Greek Orthodox Church of Price, Utah, was officially dedicated. Special trains brought Greek men and what few Greek women and children there were, from the nearby coal camps to Price for the celebration. This was a great day for the Greeks—they had their own church and they had their own priest, Rev. Mark Petrakis. This event, however, did not happen overnight.

Only thirteen years before, in 1903, the first Greeks arrived in Carbon County, Utah. Three young men had come to work in the coal mine at Castle Gate, Utah. By 1905 there were Greek men throughout the country who had answered the call for laborers to work in the coal mines. The majority of these men were from the island of Crete, but there were also some from Roumeli and other parts of mainland Greece.

There was little money among the young miners when they began plans to build a church. There were many obstacles, but those faithful Orthodox Christians realized that without the Church in their lives, life for themselves and their future families would not be complete.

Between the years of 1916-1918, it is believed that there were approximately 3,000 Greeks in Carbon County, but there were still few Greek women. However, following the building of the church, more men began to send to Greece for wives.

In 1942 and again in 1960 the Church was remodeled. The recreation hall was enlarged with a modern kitchen, storage room and pantry. A new Sunday School building was completed in 1962.

One hundred years have passed since the Assumption Church was built. One cannot help but see all of the changes that have taken place since that event. For the Carbon County Greeks those changes are dramatic. Many men left the mines to become sheep men and farmers; others opened restaurants. Still others became merchants and businessmen. Mining was a hard, hazardous occupation; therefore, parents encouraged their children to seek an education which would enable them to get other employment and have a better life than that of their parents.

The mining industry declined. Many families were forced to leave in order to find employment elsewhere, and children who were old enough, did leave Carbon County to pursue their dreams.

Today, Greek-Americans throughout the United States can trace their “American” roots to Coal Country in Utah. There is a special bond among those who can, because Carbon County was a diverse land with thousands of immigrants from different countries coming here to better their lives. Those immigrants weathered prejudices, shared sorrows and hardships, joys and celebrations. The bond was great.

In celebration of this centennial, many activities have been planned. There will be a golf tournament, a special banquet, and dancing. Tours to various historic locations are being planned.

His Eminence, Metropolitan Isaiah of the Greek Orthodox Metropolis of Denver, will be celebrating church services with other priests who have served the Price community.

The schedule of events is as follows:

Arrival of His Eminence 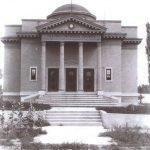 The original structure of The Assumption of The Virgin Mary Greek Orthodox Church. 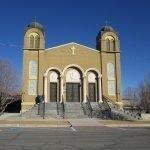 The current view of The Assumption of The Virgin Mary Greek Orthodox Church, after two renovations.