Emery County employees and the Bureau of Land Mangement have recently worked to improve a trail on which two lives were taken and two were critically injured.

The incident occurred on May 25 in the San Rafael Desert. According to a police report, the location of the accident was at the far west end of Eagle Canyon east of the town of Moore. Seventy year-old Hubert Roger Issel and his 64 year-old wife Alana Lea Issel of American Fork, Utah were killed in the accident while two of their grandchildren, ages 7 and 8, were critically injured in the accident and were transported by medical helicopters.

From investigation of the accident scene, it appears the Can-Am side-by-side driven by Mr. Issel was traveling on an established trail when it came to a steep rocky ledge in the trail. This caused the vehicle to roll down the trail and then off a cliff approximately 80-100 feet to the canyon floor.

The two children that were critically injured during the accident are still recovering.

Since the accident, improvement of the trail became a priority for the Bureau of Land Management and the county. According to Emery County Commissioner J.R. Nelson, the BLM reached out to the county and requested improvements on the trail.

The duo agreed to work together to level the trail by smoothing it out and making it easier to ride.

“This trail is not the most extreme,” Nelson explained. “It is a medium (difficulty) one. We took out the little spot that we think caused the rollover.”

The BLM, along with multiple, hardworking volunteers, will be adding signs to the trail to advise riders of the potential danger the trail poses. BLM volunteers donate their time working throughout Carbon and Emery counties to make trails safe places on which to ride, which, in turn, improves recreation in the area. 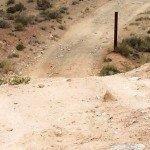 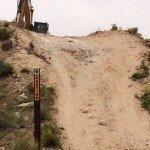 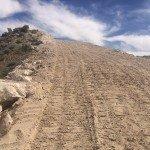 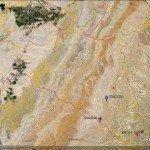 Photo courtesy of the BLM. The map displays where volunteers will meet/work to sign the trail.