Anthropologist and author Kevin Jones visited with avid readers and writers on Wednesday night at the Price City library to kick off Author’s Month. Jones discussed his new book “The Shrinking Jungle” and described his writing style and process to the crowd.

“The Shrinking Jungle” follows a fictional Aché band that is forced with the challenges of living in a forest that is being diminished by loggers and farmers. The Aché were hunter-gatherers in the jungles of Paraguay and were among the last tribal peoples to come in contact with the outside world. The story follows one family who is being affected by the expansion of modern, industrial society.

Jones lived among the Aché while ethnoarchaeological fieldwork as part of his graduate studies. His studies led him to write a fictional account of the people and their struggles. During his presentation, he described some of his experiences and explained his writing process. 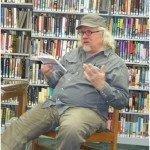