At approximately 12:30 this afternoon, an accident occurred at 1000 North 750 West in Carbonville.

Officers from the Carbon County Sheriff’s Office, Utah Highway Patrol and USU Eastern as well as Price City Fire Department responded to the scene where it was discovered that there were two injured.

An approximately 25 year old male was the driver of a Dodge Ram. He was immediately taken to Castleview Hospital for injuries that he sustained from the crash. The ATV victim reported that the truck was headed south on 750 West and driving erratically into the other lane, eventually veering off of the road where he hit a fire hydrant and the man on the ATV.

The ATV driver was spraying weeds from the four-wheeler when he noticed the vehicle coming toward him. He stated that he tried to back up with no avail. It is fortunate that the ATV driver only sustained minor injuries. The incident is now under investigation. 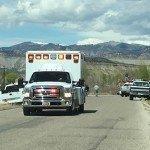 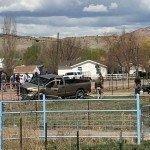