Three of the main purposes of Back Country Horsemen are to: (1) Perpetuate the common sense use and enjoyment of horses and mules in America’s back country and wilderness; (2) To work to ensure the public lands remain open to recreational pack and saddle stock use and (3) To assist the agencies responsible for the management of public lands.

Consistent with these purposes, during 2020, the San Rafael Back Country Horsemen completed several projects in our area. The horsemen completed improvements valued at more than $100,000. Just over $60,000 was donated as labor and the use of personal equipment by chapter members. The chapter also obtained three different grants totaling $41,000.

Two of the grants were Recreation Restoration Infrastructure Grants issued by the Utah Office of Outdoor Recreation and the third grant was a Swell Trails Grant Program from Emery County. These grants were used to hire American Conservation Experience (ACE) crews to rebuild a bridge in the upper portion of the Left Hand Fork trail in Huntington Canyon and construct a new section of trail around a dangerous slide area on the Flood Canyon trail (also in Huntington Canyon).

Other trail work included the rebuilding of a bridge on the Josephite Point Trail, which was built by members of the San Rafael Chapter. Tools and construction materials were packed into the bridge locations by horses. Additionally, downed trees were cut out on more than 50 miles on non-motorized trails in the Huntington Canyon and Joe’s Valley areas.

Two of the three trees (stringers) supporting the Josephite Point Trail bridge were cracked. As a result, the deck of the bridge was on a dangerous slant and the strength of the bridge had been greatly compromised. Over a period of three days, the bridge was rebuilt.

The old bridge was disassembled and removed, and the useable decking was used on the new bridge. New stringers were cut from the nearby forest. These trees were cut to length and had the bark peeled off prior to being placed across the gully. Additional decking, tools and other material were packed into the location from Pete’s Hole Reservoir.

Along the six miles of the Left Fork of Huntington Canyon National Recreation Trail, there are many bridges. A gabion abutment on one of the bridges was damaged by erosion after the Seely wildfire. As a result, one end of the bridge had dropped. The bridge was disassembled, the gabion replaced and leveled, and then the bridge reassembled.

An ACE crew camped near the location of the bridge during the project. Each crew member packed in their own personal gear, food and remaining camp gear. The necessary equipment and materials for the bridge were packed in by horseback. This crew also improved the trail for several miles below the bridge.

Early last spring, the trail in Flood Canyon was damaged by a large slump next to the trail. This damage is shown in a photo below. As can be seen, this created a very dangerous situation. Late last fall, we had the opportunity to hire an ACE crew to repair this damage by re-routing the trail around the slump.

More information and additional photos can be found by clicking here. 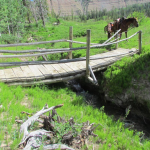 Bridge with broken stringers on the Josephite Point trail. 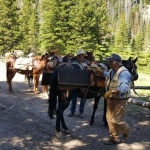 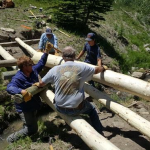 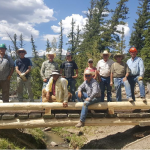 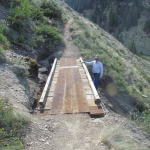 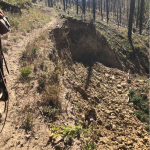 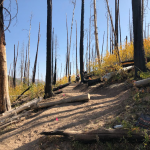 Newly constructed trail around the slump on the Flood Canyon Trail.