Rose Barnes, who has held the position of Human Resources Director for Carbon County for nearly 15 years, is retiring at the end of 2021.

Barnes earned her Bachelors of Management degree with an emphasis in finance in 1976 from the University of Utah, where she also interned in the personnel department.

Following graduation, Barnes returned to Carbon County and began working for Soldier Creek Coal Company. She then moved to Omaha, Nebraska in 1978, where she worked for Brandeis, which was a local department store.

She spent a number of years in different areas, working for various companies, returning to Utah five years later. Barnes stated that there were not jobs available in the human resources department until she began to work at Four Corners Community Behavioral Health in 2007. She then made her way to Carbon County.

Barnes has worked with many employees of the county, seeing rotation through the commissioners and other changes. She stated that her favorite part of her job has been the employees and working with the commissioners. Barnes shared that when she was hired, she really did not know what local government did or how it functioned, and it rewarding to see what the county and employees do for area residents.

Regarding challenges, Barnes stated that human resources can be a very high-stress position and dealing with employees and discipline at different levels can be hard. She also shared that it is not easy when the need to discipline or terminate comes, as the county employees are people that she knows and works with.

Barnes wished to thank Carbon County for affording her the opportunity to work for them, stating that the job has been rewarding in many ways. In her time as the director, Barnes was able to assist in updating policies and procedures, initiate the employee of the month recognition and supervisor meetings, and create a real open-door policy for employees at all levels.

Barnes also shared that she is very proud of the fact that they began the Carbon County Fundraiser. To date, $205,786 has been raised through the tournament that has been given to local charities or individuals in need. She said that this is always a wonderful way for the county to give back to the community.

Going forward, Barnes stated that she would like to see that employee moral is always a priority. She is eager to see her predecessor, Kellie Payne, step up and take the challenge.

Payne has worked as Barnes’ assistant for nearly five years and when she first began, Barnes could tell that she had a lot of potential. She urged Payne to return to school and obtain her degree to hopefully take her position when she retired. Payne accomplished this while also working full-time.

Payne earned her Bachelors of Business Administration and Human Resource Management. Barnes stated that she will take the job and develop it further.

Payne stated that her biggest challenge stepping into the role of Human Resources Director will be that she will be the go-to person. Before, she had Barnes to lean on and now she has to be that person. However, she said that she is glad to have the county commissioners to help her along the way.

Payne is excited to be in a new role and challenge herself. She said that she is ready to see what the future has in store, though she is sad to see Barnes leave. Payne credited Barnes as a very supportive individual and a great mentor, who will continue to be a friend to Payne.

“She handles herself well in all situations,” said Payne.

Barnes’s retirement will begin following her last day on Dec. 30. Effective in January, Payne will step in as the director. 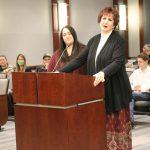 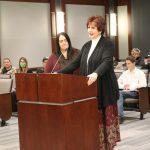 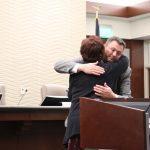 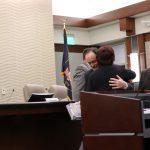 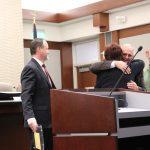 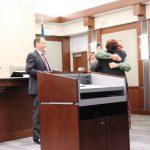 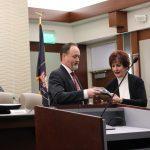