William Barney Zauss was sworn in as a temporary Wellington City councilman on Wednesday evening. Zauss took his oath during the city’s regularly-scheduled city council meeting.

Wellington City Recorder Gracie Procarione administered the oath of office ceremony in front of the council and those in attendance. During the ceremony, Zauss pledged his dedication to serving Wellington City and its residents.

Zauss is filling a council seat recently vacated by Dirk Bradley. The position is temporary as it will last only until early January, which is when Bradley’s term would have concluded.

However, Zauss is on this year’s ballot to fill a council seat. He, along with Garrit Pell and Jack Leon Clark, are vying for four-year council seats. The winning candidates will then be sworn in to their positions in January. 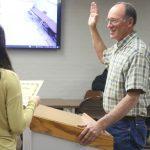