The Castle Valley Barracudas hosted a meet on Jan. 11 against the Vernal Vipers. The Barracudas had 38 swimmers compete against Vernal’s 29 participants. The Barracuda girls beat the Vipers 1201-579 and the boys also crushed Vernal 1045-698.

“The Barracudas only practice two days a week for an hour during the winter so I wasn’t expecting great times but we ended up with 59 best times, I was impressed,” remarked coach Kamra Davis. “One of the best highlights of the day was Thalyann Lymen broke the Barracudas team record in the 25 freestyle with a time of 17.57 that was held previously by Kacee Barrett at 17.73. We had so many great times I can’t mention them all.”

Barracudas have a strong group of 9-10 year old swimmers. The girls finished the 25 free with Lymen in first, Nicole Swasey in second and Bryndee Maxfield in third.

Swasey garnered first in the 25 breaststroke by more than four seconds. Maxfield placed first in the back stroke, Lymen in second and Jezmin Pressett in third. In the 25 fly, Maxfield finished second and Katelyn Bower captured third place.

The boys 9-10 group also had a strong showing with Boyd Bradford winning first in all of his events including the 25 free, 100 IM, 25 breaststroke, 25 back, 25 fly and 50 free. Dallan Dart took second in the 50 free and third on the 25 breaststroke.

“We welcome anyone interested in swimming as long as they can swim an entire length of the pool without stopping. They have to have proper breathing technique,” Davis explained. “We have became such a large team that we now have two available classes.”

One class will be on Monday and Wednesday from 3:30-4:30. Coach Davis will instruct the classes along with Kenzie Kulow and Lauren Engar.

The other class will be on Tuesday and Thursday and coach Kaeden Kulow will be the instructor. This class is limited to the first 20 swimmers that sign up. 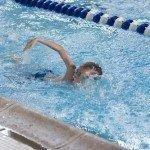 Rusty Seeley splashes he way to the finish 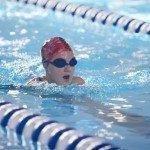 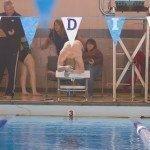 Tyson Swasey dives in for a quick start 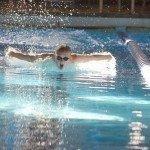 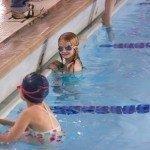 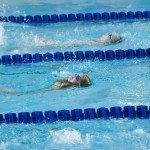 Liliy Seely shows her form in the back stroke 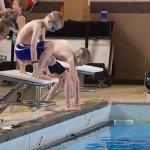