This will be Principal Bruce Bean’s last year at Carbon High as he transitions to the Carbon School District Office this summer to serve as an administrator there. But, that does not diminish his opinion of his school, the people who work there or the students who attend classes.

“We are surrounded by great people here,” he said as he sat behind his desk. “You know, when I coached here, I had some good players. Having those good players didn’t make things easy all the time, but it did make for a lot of success. And that is the way it is with this faculty and student body.”

Saying that, he then went on to talk about the faculty members on the staff at the high school who drive success in students. He pointed to some trophies and plaques for Quizbowl that were sitting in the corner that the school’s team recently won.

“We hadn’t been doing that well in that over the past few years, but we have a brand new faculty member who said ‘I would like to take that on’ and she did and look at the result,” he said. “We went from having a small group of eight or nine students who participated and now she has varsity, JV and sophomore teams.”

He then discussed many various activities that have grown this year and how students have excelled in those.

“The set for our recent school play was outstanding and it was built by students,” he said. “I sent a photo of it to my niece who is involved in theater productions and she said that was as professional of a set as she has seen anywhere. Credit for that does not only go to Mr. Pay, but to the students and the parents who support them and those that come to the performances. That’s how things are successful.”

He also spoke about athletics, particularly the wrestling team, which sent 16 students to state. He also said how special the girls’ basketball team was in getting awarded the top academic team in the state (3.6 grade point average among the players). He then mentioned the good sportsmanship that the wrestling team showed at the state tournament and how the basketball team reacted to losing at state with great sportsmanship concerning a tragedy that took place for a player on one of the teams that beat them.

“And what about the girls’ state swim team that took the 3A title that no one would have believed they could?” he said with excitement. “There is one simple thing about all of this: players emulate what the coaches do and we have great coaches.”

He then discussed the great talent at the school concerning everything from music to drama to athletics.

“Like all schools in the state, we have our battles to fight and it is easy to get cynical or sour, but the successes are important,” he explained. “We often emphasize the great achievers, but we also need to honor students that are growing and reaching goals they have never reached before.”

He said that achievement doesn’t always show up as a 4.0 grade or a trophy. He told the story of one student who had always had some zeros on his work in classes.

“One of our interventionists came in and asked me if we had something we nice we could do for this kid because this quarter he did not have one zero in any of his classes,” said Bean. “There was also another student who, when she got her grades, had not failed one class on her schedule and she had never done that before. That is achievement and is just as important as the straight-A scholar or the star athlete.”

He said that many kids come from backgrounds and environments that make achievement difficult. That is why the interventionists that they have at the school are so important.

“Sometimes, kids have no hope and we have to try and give it to them,” he said. “And then, there is a big group in the middle that work hard but are not stellar achievers. They are great to get along with, they do what they are supposed to and they are the biggest group of our students. We need to support all students.”

He also talked about how the students vote for the best teachers of the month and how students comment on how those people make a difference in their lives.

Then, he addressed the stress and anxiety students face today. He said that most people that are middle aged and older wonder what kids could be stressed about, but it is a very different time for teenagers from what existed 30 to 40 years ago.

“When, for instance, I look at a 17 year old, who because of circumstances has just become the leader of his family because the adults in his life have let him down, I see what they must do. But, I see that from the view of someone who is in his 50s and has better coping mechanisms with what happens than they do,” said Bean. “There are a lot of people who care here. They look beyond what they see on the outside and look to what a young person is inside and can become.”

He said that he is happy to be moving to his new position and will miss a lot of what goes on at Carbon High. But, he also said that the new administration at the high school next year will be great and that some very good things will be happening there in coming years. 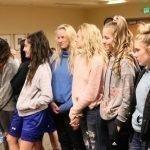 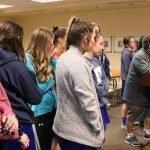 Members of the Carbon High girls basketball team being honored by the Carbon School Board for their outstanding academic achievement. 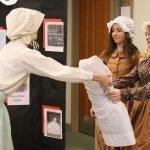 A performance concerning the life of Laura Ingles was part of this years Carbon High History Fair. 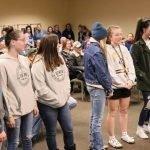 Girls from the Carbon High Swimming Team are honored by the Carbon School Board for taking first at state in the 3A classification. 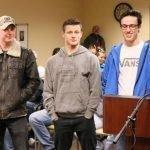 Some members of the Carbon High Wrestling Team at the February Carbon School Board meeting. The team took 16 wrestlers to state competition.