The Business Expansion and Retention general group meeting was told on Oct. 1 about how Emery county has some very definite plans for a Green River industrial park and that the tourism department has been participating in a trial program with four other counties on a branding project.

Jordan Leonard, the economic director for Emery County displayed a Green River map for the group and pointed out the various developments that are planned, with some coming close to fruition soon.

“The industrial park will be northwest of the present town site and is about six miles wide,” he told the group. “Part of it will involve the proposed nuclear plant that is being planned by Blue Castle.”

He said  things are moving toward the tail end of getting the nuclear project started. Leonard said that he recently had a conversation with Aaron Tilton, Blue Castle’s CEO and the plans are for the plant to have ground broken in between one and five years. He said an appeal filed by groups opposing the plant with the court of appeals on the original decision concerning the water rights for the plant should be settled soon.

Leonard talked about other projects in the area, including a possible solar farm outside the confines of the industrial park. He also pointed out another stumbling block for development that has plagued rural Utah for some time.

“Some of the development would probably depend on whether natural gas could be brought to the Green River area,” he said.

Leonard said it will cost about 10 million to get the infrastructure in to bring gas to the area.

He also pointed out that a sand plant is planned for the area. The sand plant would provide various kinds of sands that are used in the process of drilling for oil.  And speaking of oil he said that oil refinery development in the area, with the ones in concept and planned, will probably be held up for awhile because of the low oil prices presently impacting the industry.

In other economic news he said that tourism numbers for the county are up this year, particularly at Goblin Valley State Park. He said this may be due to the publicity the area got from the “Goblin Topplers” recently.

With that Tina Carter, Emery’s director of tourism took over the presentation.

“The main question we needed to ask when it came down to it is ‘What sets our area apart?'” she told the group.

She said those working on the challenge needed to look for things that made good first impressions about the county as well as that which is unique to the area. She told the group that the committee they formed  had to narrow down their focus to 10 things that were unique.

The Goodwater Rim Trail, which travels along the rim of The Wedge in the San Rafael Swell was a prime candidate for what they were looking for. She said that the county’s GIS department had come up with some unique interactive maps that can help people to navigate trails properly and keep them where they should be to avoid breaking restrictions that may be in place by federal land agencies. She also showed a video that was made about the trail, with some spectacular views portrayed along with happy riders on their bikes.

In conclusion, she said the goal of her department was to increase visitor and local spending on tourism. She pointed out that as little as 10 years ago many people did not see tourism as an economic strategy, but today many recognize how important it actually is.

During the presentation that day Leonard also introduced Rob Murray who is starting a robotics program in Emery County. The program will involve first through sixth grade students and they will work on building robots that do certain kinds of things for a competition called US First. Teams that are set up can build machines that they can use compete in the competition for robotics that he illustrated with a video from a past competition. The students can win scholarships through the program. Murray said that presently there are 27 teams in Utah. He projects the program will begin with 10-15 kids being involved.

Eventually Murray said he would like to start a program in Carbon County as well. 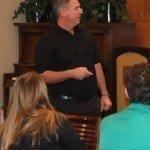 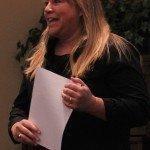 Linda Carter talks about the trail program on branding that Emery County has been participating in.