Bicyclist Peter Kilbourne of Price was struck by a vehicle today while riding on Highway 6 near the turnoff to Carbonville Road. According to Utah Highway Patrol, Mary Gordon of Helper was traveling eastbound, attempting to turn on to Carbonville Road when she struck Kilbourne, who was also in the turning lane.

Southbound traffic came to a complete stop while officials and a responding ambulance assisted Kilbourne, who denied medical attention. He was later transported to Castleview Hospital by a deputy for hip pain. The cyclist was wearing a helmet.

“After speaking with him (Kilbourne), it doesn’t sound like the speeds were really high,” said UHP Trooper Levi Oman. “It could have been a lot worse, that’s for sure.”

Gordon was cited for failure to yield. 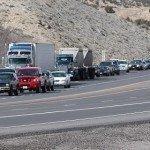 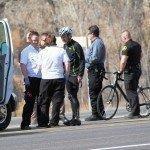