Scofield Reservoir is always a good place to fish in late fall. But this fall, the chance of catching a big tiger or cutthroat trout might be better than ever.

On Oct. 3, aquatic biologists with the Division of Wildlife Resources sampled the reservoir using gill nets. What they found should cause any trophy angler’s heart to beat a little faster.

Biologists captured good numbers of both tiger and cutthroat trout. Most of the fish fell within or exceeded the slot limit of 15 to 22 inches. All of the fish were extremely healthy and robust. The biologists even collected a 32 inch, 14 pound tiger trout. That’s just a few pounds shy of the official state record.

Since the onset of fall, anglers have been catching trout using chub meat cast from the bank or toward shallow water from a boat. Predatory tigers and cutthroats seem to be patrolling the shoreline for unwary chubs.

Although anglers commonly use nightcrawlers, big trout would rather eat fish. Putting chub meat or even whole dead chubs on the hook can be the ticket to catching a trophy fish.

Chubs can be caught anywhere in the reservoir with a piece of worm cast in shallow water. Most recently, anglers have had the best luck finding chub along the rocky east shoreline.

In addition to chub meat, anglers should try casting a Jakes Spin-a-Lure or a Kastmaster. Fly anglers have been catching trout with leech, woolly bugger and soft hackle fly patterns.

Set a day aside

“If you’ve been dreaming of catching a trophy fish, now is the time to try,” says Brent Stettler, regional conservation outreach manager for the DWR.

“The temperatures are mild,” he says. “The bugs are gone. Skies are a deep blue and aspens cover the mountain slopes in brilliant yellow. Set a day aside, and try your luck. You might be the next angler to break the state record.”

For fishing updates, check the DWR fishing reports at wildlife.utah.gov/hotspots. Other good angler information sites include utahwildlife.net and bigfishtackle.com 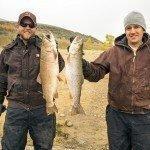 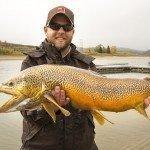