Bike & Build is a summer program in which young adults cycle across the country in order to participate in housing projects. There are eight routes this summer that go cross-country. Habitat for Humanity of Castle Country’s (HFHCC) A Brush With Kindness (ABWK) program recently teamed up with Bike & Build, specifically its C2C (Connecticut to California) branch, to improve a house in Green River.

The project was tackled on July 27. Twelve visiting volunteers, supervised by AmeriCorps VISTA for Habitat representative Katie Anderson and ABWK intern Maggie Cochrane, were able to scrape, clean and paint the single-story house in just under six hours that day.

The house was purchased in June by a local family who has been working tirelessly to fix it inside and out. With ABWK’s recent donation of paint, the family saved around $130. Labor costs were also diminished due to the number of Bike & Build volunteers that assisted, who were in Green River for a total of two days. They worked with ABWK and Epicenter on five local repair projects and renovations, including the painted house.

The homeowner stopped by during the workday to extend his thanks; he and his wife were excited to see the new colors on their home. A Brush With Kindness has two other projects due to start construction in early August as well as another house-painting project in process.

ABWK would like to thank the Sorenson Legacy Foundation, the George S. and Dolores Doré Eccles Foundation, AmeriCorps, Wells Fargo, Rocky Mountain Power Foundation, Utah Association of Realtors, Union Pacific Foundation and ACE of Green River for their support. Without the support from these sponsors and donations from local residents and vendors, HFHCC would not be able to help people in need of repairs. 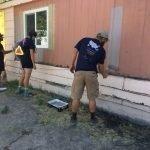 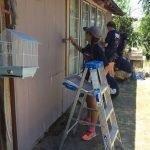 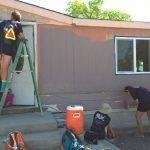