Bill Bate, known to many as Mr. Bate, came to Price in 1959 looking for employment as a teacher and didn’t realize what he was getting himself into. He found a career he loves, the love of his life, a beautiful family, countless friends and a place to call home.

Bate was born and raised in Eureka, Utah and graduated from Tintic High School in 1952. He loved to play sports in high school, especially basketball. He then attended Brigham Young University and graduated in 1957 with a degree in Physical Education and Health.

Bate served his country in the US Army when he was drafted after graduating from college. He volunteered to serve overseas without thinking of the danger that might befall him with conflicts in Korea and Vietnam. He had the opportunity to serve in Paris, France and see the world. As his dad always said, “the best way to see the world is to join the army.” So, Bate served for two years in the US Army and then in the Army Reserves. He loved serving side by side with an Army dentist while on the ship that transported them to France.

Bate signed a teaching contract in 1959 with Carbon School District teaching fifth grade. He loves education and always wanted to help others learn. He not only found a job but fell in love with LaRue Watt and started a family 63 years ago. He taught at Durant Elementary until he became a principal at Sally Mauro Elementary in Helper. After his time as principal, he went back to the classroom for a few years, then was asked by the school district to become the transportation specialist and purchasing agent. Bate served in this capacity for eight years before he became the principal at Castle Heights Elementary School.

He then tried to retire after 42 years, but was asked to come back and be principal again for a year. Bate always tried to help when and where needed throughout his career and life. After his second retirement, he became the physical education specialist at Castle Heights and still holds that position to this day.

Mr. Bate is always willing to share his knowledge of teaching, physical education or science. He encouraged his children and students to participate in science fairs and had many participants present their projects at the school, district and regional levels. Bate presented on numerous occasions at the Utah Education Association Conventions on physical education and science.

His presentations were models for other educators to use in their classrooms. One letter he received said, “Mr. Bate, years ago I attended Castle Heights and LOVED IT! Thank you for being such a great educator. I, myself, became an educator because of my excellent experience here at Castle Heights! Thanks & Best, KP”

Mr. Bate has contributed to the Price community through his church service. He is a member of the Church of Jesus Christ of Latter-day Saints and has served in different callings. One of his favorites was primary teacher, which goes along with his teaching career. He loves to serve others and is always trying to help his neighbors and the widows in his neighborhood, even at the age of 87. He bakes cookies and takes treats to his neighbors and makes sure their snowy walks are shoveled or volunteers his snow blower for the whole street. 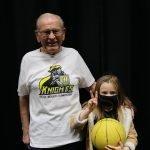 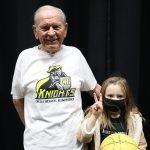