Leadership in the House and Senate are working on the budget for the 2021 fiscal year.

Lots of negotiating and compromising is still going on. There is plenty of money in the education fund and no where enough in the general fund. Most likely, money will be taken from the higher education fund to shore up the general fund. Usually, you try to keep your appropriation (money) request above a certain line. I spent some time with one of our leaders who is working on the budget. He said right now they are guaranteeing the top choice of each committee. That is really hard news to hear, but we will know by the end of this week where things end up.

We are continuing to pass bills that have fiscal notes with them, but we are also voting down many of those bills. We all know that if a bill passes and there is no money, the bill dies for lack of funding. The next nine days will be hard; we are limited to how many days we can pass House Bills and we are going to stay late several nights to get many debated and passed.

SB59, a bill that will change our clock-changing ritual, is on its way to the governor. The catch is that several things have to happen before it can take place. First, the federal government has to approve the change and they have not been easy to persuade. Second, at least four other western states have to pass similar legislation. As the House Sponsor pleaded, please pass this bill so we don’t have to deal with another daylight-savings time bill. It passed, and now we have to wait for the other pieces to take place.

SB37 is a bill that deals with the epidemic of vaping. Joe Miner, Executive Director of the Utah Department of Health, said vaping continues to be a serious public health issue, particularly among children. This bill, if passed, will change the tax on vaping products to 56%. The bill would also place new restrictions on vaping distributors. It would enact stricter criminal penalties for selling or supplying vaping products to minors. There are several other bills in process that deal with vaping.

Monday, the first cannabis dispensary is set to open. We had to quickly pass a cleanup bill dealing with cannabis so that could take place. It passed both the Senate and House without any dissenting votes. The bill allows the state to conduct initial product testing. It raises patient caps for doctors writing prescriptions, clarifies that private employers don’t need to allow marijuana use and requires the raw marijuana flower be packaged in sealed containers with a 60-day expiration date, among other provisions. The Utah Department of Health began accepting applications for medical cannabis patient cards online Sunday at 9 a.m. The process will not be fast as the department is in the ramping up stage. If you have questions or want to apply, go to medicalcannabis.utah.gov.

I am still working really hard to get funding for housing revitalization in my district. With the shortfall of money, it is harder than ever. Scott Anderson, the CEO and president of Zions Bank, wrote in an article titled “Utah’s rural communities need a business boost.” In this article he wrote, “Invest in housing. Housing stock revitalization will help make rural Utah a safer place to invest.” I know that this is critical to our future. Please keep your fingers crossed for my success. Thanks again for your support. I can hardly wait to be back home full time.

Please continue to reach out to me with questions or concerns. Email: christinewatkins@le.utah.gov Cell: (435) 650-1969 Facebook: Representative Christine Watkins – District 69 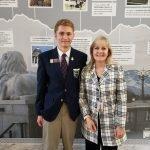 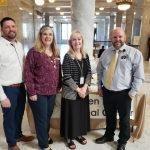 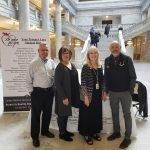 Representative Christine Watkins met with representatives from Carbon Medical at the Capitol. 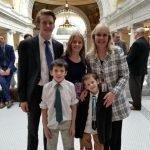