The body of missing West Jordan police officer Jedediah (JR) Steadman was located Sunday morning in Link Canyon in Eastern Sevier County, about a mile away from Emery County. According to Emery County Sheriff Greg Funk, a trapper located Steadman’s truck after following tire tracks in the snow that led off the edge of a steep cliff. After making visual contact with the vehicle, the trapper notified authorities immediately.

According to law enforcement, Steadman failed to negotiate a sharp right hand turn on a snow packed road and went over the edge, landing some 70-80 feet below. Because the crash site was so remote, it took most of the day for rescue crews to reach the scene. “I flew over the vehicle myself in a chopper the day before and missed it,” Funk explained. “We used rope teams from both counties to reach the site and to extricate the victim and a large semi-wrecker was used to remove the truck.”

Steadman was last seen leaving his home in northern Utah on Dec. 30. Family, friends, nor colleagues heard from him since that time, prompting a statewide search for the missing man.

Because the Steadman family owns a home/cabin in Emery County, Funk was contacted by West Jordan police on Dec. 30. “Deputies responded to the residence that day,” Funk explained. “There was some snow on the ground but no tracks of any kind were near the residence. Deputies also checked the doors to find that they were locked at that time as well.”

The Emery County Sheriff’s Office continued their search the following day, which spread to Joe’s Valley, Huntington Canyon, Moore and surrounding desert areas. A helicopter was also used during the search.

“We have a good working relationship with agencies in surrounding counties,” Funk stated. “Both Sevier and Emery county personnel performed fantastic work during this effort.” 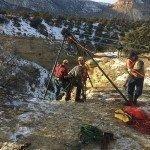 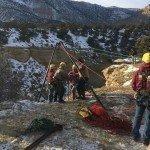