The Utah County Bomb Squad responded to Castle Country RV near Helper on Wednesday after a hand grenade discovery was reported.

According to the Carbon County Sheriff’s Office, the hand grenade was found in a pile of rocks on Wednesday morning before being reported to local authorities.

Members of the Carbon County Sheriff’s Office responded to the scene and quickly requested the assistance of the Utah County Bomb Squad. Once on scene, squad members were able to use a robot to recover the grenade and safely dispatch it within a pre-dug hole. Local companies Questar, Emery Telcom and Price River Water Improvement District were on scene during the digging and detonating phases to make sure no infrastructure was damaged.

According to Cletis Steele of the Carbon County Sheriff’s Office, the grenade was first discovered in a delivery of rocks to the local business. The grenade appeared to be a model from the 1960s. With a pulled pin, the bomb squad believe it did have a charge.

No one was injured as a result of the grenade and no infrastructure was compromised when it was detonated around 2:30 p.m. 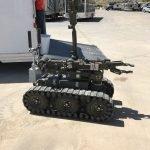 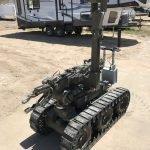