Every year, LifePoint honors one person from its dozens of hospitals to receive the Mercy Award. The award honors outstanding employees for their commitment to LifePoint’s high standards of excellence and is named after founding chairman and CEO Scott L. Mercy (1961-2000). This year, Bonnie Ryan from Castleview Hospital has received the award after 38 years of dedicated service.

In order for a person to be nominated for the award, he or she has to embrace LifePoint’s High Five Guiding Principles. In addition, the award commends individuals who go above and beyond their call of duty in serving patients, co-workers and the community, demonstrating a level of commitment and caring, respecting everything they do and inspiring others with compassion, dedication and a merciful spirit. Throughout her service at Castleview, Ryan has displayed these qualities and much more.

Ryan has worked at Castleview Hospital for over 38 years and has performed many jobs for the hospital throughout the years. She has worked in women’s services, ICU, emergency department, med/surg and is currently responsible for CORE measures.

According to Dannette Moynier, Staci Noleroth and Joan Kilcrease, all of whom nominated Ryan, the Castleview worker is very professional and has a high level of expertise in the nursing field.

“She is very willing to share this knowledge with others as she is asked and volunteers to perform other tasks,” they said. “Bonnie cares about people. She is passionate about taking good care of patients.”

In 1984, Ryan was a flight nurse in Price. One day, the helicopter she was in experienced a terrible crash. In the accident, she broke her ankle and collarbone. This did not stop Ryan from assisting others involved in the crash, including a mother and two children. While an accident like this would stop many people from even stepping aboard an aircraft again, Ryan set out to overcome her fears. In the 1990’s, she once again became a flight nurse, this time operating a twin engine airplane.

This is just one of the many examples of Ryan’s unrelenting desire to go above and beyond her job description in order to serve others.

“She gives all of herself to the hospital because that is who she is,” the nominators said. “Bonnie is dedicated to her job and she ensures everyone she encounters while she is at work is taken care of.”

While Ryan shows exceptional qualities at work, she also is a large asset to the community. She participates in charity events for entities such as Walk for a Cure, United Way Day of Caring, and the Leukemia and Lymphoma Society Light the Night Walk. Ryan even organized her own event to bring funds, awareness and education to the community about diabetes. The “Sweet Success in the Fight Against Diabetes” events featured a motorcycle ride, which included riders from the area.

In any time Ryan has aside from working and participating in fundraising events, she spends helping individuals throughout the community.

“Bonnie not only takes care of patients in a hospital setting, but she also does home visits for a few elderly patients whom she has befriended through the years,” Moynier, Noreroth and Kilcrease explained. “She extends her caring attitude in different ways such as driving a discharged patient to Green River in a snow storm. She’s reliable and can be depended on no matter what the task entails.”

Ryan is the mother of two daughters and five grandchildren. She enjoys participating in the weekend farmers market and is an outstanding leader for the young women at her church. 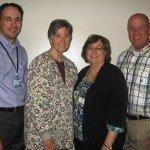