Emery County Sheriff’s Office (ESCO) personnel rescued two Cedar City scout groups from an ill-fated canoeing adventure on the Green River Tuesday afternoon. While on patrol in Green River, Sgt. Mitch Vetere received a call from a relative stating that a distraught young man had shown up at a farm needing assistance. Sgt. Vetere responded to the farm and spoke with the young man who stated that his canoe had sunk and floated down the river. He said there were over 20 scouts and leaders in his group, most of them in homemade canoes.

Sgt. Vetere hooked onto an ECSO boat staged in Green River and headed to the Green River State Park boat ramp with the young man. When they got to the ramp, one of the scout leaders was there. The leader had sunk his canoe after traveling only a couple hundred yards but was able to self-rescue and make his way back to the boat ramp. A gentleman that lives down river then pulled up with three more scouts and a leader who had aborted their trip after too many canoe problems.

At that time, Sgt. Mitch Vetere, Deputy Jeff Newland and Deputy Dylan Keele launched a rescue boat and headed down river in an attempt to locate the other scouts and leaders. Two scout leaders accompanied them. The ECSO boat crew located one scout clinging to a tree about one mile downstream. They were able to coax him to let go and float to the boat using his life jacket. The ECSO boat continued downstream where they located the rest of the scouts and leaders. The ECSO was able to offload the remaining canoes, which were bogged down with gear, and stayed in the area until all made it safely to the shore at Crystal Geyser where they could be picked up by vehicle.

The scout groups had planned to canoe from Green River State Park to Mineral Bottoms over the next few days, a distance of 67 river miles. Their trip ended only four miles from the boat ramp. Sgt. Vetere, who has spent a lot of time on the river over the years, stated that homemade canoes of this type have no business being on the river, especially with the river currently running at 13,000 cfs. He stated that current river conditions are even a little high for commercial canoes with experienced canoers. These canoes were made with PVC pipe and wrapped with a plastic tarp material.

Sheriff Greg Funk wants to emphasize that if you are going to be on the rivers in Emery County, do your research, know your limitations and be prepared. He stated, “We have had numerous river rescues over the years, on the Green, the San Rafael and the Muddy. It is fortunate that the canoe problems happened early in this trip where there is access to the river from the banks, rather than farther downstream with sheer canyon walls. The Green River is wide, the water is cold and hypothermia can set in in a matter of minutes.”

Another plus is that ECSO rescue boats had recently been serviced after sitting through the winter, and were used in a to-day river rescue exercise just last month.

Total rescue time was three hours and all were accounted for. 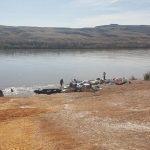 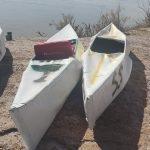 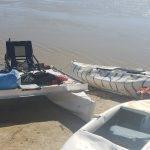 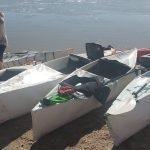 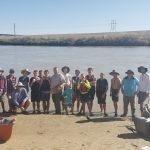