A Flying J Fuel Truck had trouble navigating the curves of U.S. 191 early Tuesday morning, resulting in a severely damaged rig with an injured but otherwise lucky driver.

The southbound vehicle was near milepost 255 just before 8 a.m. when the pup trailer the unit was hauling went off the shoulder pulling the main truck and tank off the roadway causing the unit to flip into a nearby ravine.

Nearby Trees Inc. workers witnessed the accident and pulled the driver from the cab. Helper Fire, Helper Police, Carbon County Ambulance, Carbon County Sheriff’s Department and Utah Highway Patrol were all present on the scene.

Emergency personnel reported the driver was visibly shaken and complained of head pain, but did not show any outward signs of severe injuries. He was transported to Castleview Hospital for further examination and care. Emergency personnel are currently working to move the wreckage while Nielson Construction crews assist in traffic control.

The tanker was carrying crude oil, there are no reports of a leak at this time. U.S. 191 is currently closed. 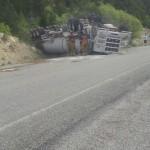 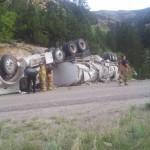 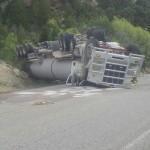