With the embankment work focusing on touch up and finish work, there is still a lot of work to be completed on the Millsite Dam Rehabilitation.

The dirt construction crew has decreased in numbers while the concrete worker numbers continue to increase, tripling in the last few weeks. There are two new walls in the spillway and the small temporary walls are being removed now that runoff has stopped.

Rebar is being drilled in to the previous concrete for the new design. Couplers are attached to the rebar in the concrete as more heighth is needed to support the backfill that will eventually tie the dam in around the spillway.

The big news at the site on Tuesday was the moving and setting of the bridge over the spillway. A large crane from Wagstaff Company had to be counter weighted to lift the bridge from its temporary site to the pedestals that had been poured to set the legs of the bridge on.

The process wasn’t without hitches as the blocks on the big truck slid and had to be reset, but it now sits in its proper place on the golf course. Hole number three on the golf course is rough graded and a water hazard (pond and fountain) is being excavated and realigned as a 24” culinary water line was broken during construction.

Golf course management is seeking compensation for the loss taken during the long construction period. 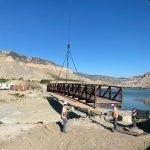 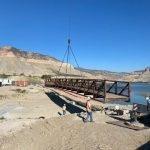 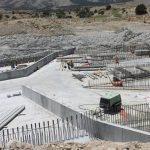 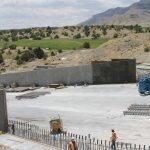 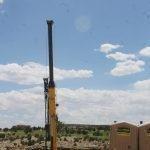