National statistics state that 1 in 14 people will have either a brain aneurysm, an arteriovenous malformation (AVM) or a hemorrhage stroke during their lifetime.

Carbon County resident Karen Ward went in to have a CTA scan done on Nov. 14, 2014 to check for possible lymphoma cancer when her lymph nodes were swollen and received results that she was one of the 1 in 14.

After the aneurysm was discovered in Ward’s anterior communicating artery, she was told that she would have to have a craniotomy to clip the aneurysm. She was shocked to discover that the aneurysm was hereditary, with her sister Kristi having survived from one just seven years previous. Ward worries continuously for her son and the other siblings in her family, hoping they don’t also have a brain disease. Ward was informed that there were a lot of risks that came with the surgery, including but not limited to, not being able to remember people, going blind or becoming paralyzed. She had less than a week to prepare for the surgery.

“I had two days to plan for my life to end,” Ward stated.

Once the surgeon clipped out the aneurysm, he informed Ward that it had been ready to rupture at any moment and that she was lucky to be alive.

After the procedure, Ward was not able to walk by herself for the first month of her recovery. She stated multiple times that she is so grateful for the love and support from her husband, because she would not have been able to make it through the recovery without him and the rest of her family.

During that time, Ward discovered the Joe Niekro Foundation website, which is an organization that brings awareness of aneurysms and other brain diseases and also helps people that have suffered have somewhere to be so that they don’t feel alone.

Inspired by the Joe Niekro Foundation, Ward decided to start her own support group. She is now the facilitator of the Eastern Utah Support Group. Ward focuses on helping people that have had brain trauma and let them know that they are not alone. She also wants to raise awareness and education about brain diseases. Some people have no symptoms of an aneurysm. However, constant headaches, partial blindness and paralysis on one side of the body are all indicators.

Ward stressed the importance of being tested.

“You might look fine on the outside, but on the inside, you’re not fine,” she stated.

To get tested, Ward suggests to request not just a CT scan, but a CTA scan and an MRA.

Every week in the support group, Ward said that she gains another favorite memory from members. She gets happy just hearing people share their stories and seeing that they know that they are not alone. As far as Ward is aware, she is the only one in the state of Utah doing a support group for brain trauma and has people coming from all over the state to be a part of it. She wants to make sure that it is known that the support group is not only for survivors, but for the caregivers of brain trauma patients as well. Ward receives help for the support group from Carla Jones, who suffered a stroke this past year.

The Eastern Utah Support Group meets at the Castleview Hospital classroom every third Tuesday of each month. If you would like to participate in the support group, you can contact Ward at (435) 650-2337 or email her at kward@emerytelcom.net. 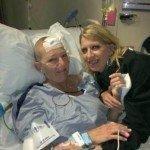