It is not as bad as the Wasatch front, but there is a winter inversion haze settling over the Carbon and Emery county areas. Southeastern Utah Health Department David Arrioti said that there is a coal byproduct pile out on Ridge Road that is currently burning and contributing to the normal winter inversion.

The byproduct pile is owned by Bowie and is burning due to spontaneous combustion. Arrioti has talked with the company and they are in the process of extinguishing the fire. The process involves moving the entire pile to get at the burning area and will take approximately a week to complete. Two years ago, the same pile also combusted and needed to be moved to put it out.

Arrioti said that there is something over by the East Carbon area that is adding to the haze, but he is unsure of what it is at this time. Even if it is identified, it may not be anything that is out of compliance and needs to be addressed. He also said that the smoke from the power plants in Emery County is also much more visible this time of year than in the summer when the vapors can escape up into the higher atmosphere.

There is no health hazard associated with the current inversion. He went on to explain that because our geology is not as confined as the Wasatch front, there is no need to cut back on wood burning stoves or heat, as it will not make much of a difference in the air quality. 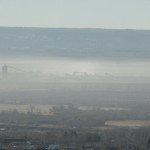